With a pile of 300 résumés on his desk and a need to pick someone quickly, my boss told me to make calls on the bottom 50 and toss the rest.

“What if the best candidates are in there?”

“You have a point,” he said. “But then again, I don’t need people with bad luck here.”

I normally do not post email forwards but this one is bitterly tickling, whoever wrote this has a great career ahead as a satirist IMHO.

The ant works hard in the withering heat all summer long building his house and laying up supplies for the winter. The grasshopper thinks the ant’s a fool and laughs & dances & plays the summer away. Come winter, the ant is warm and well fed. The grasshopper has no food or shelter so he dies out in the cold.

The ant works hard in the withering heat all summer long, building his house and laying up supplies for the winter. The grasshopper thinks the ant’s a fool and laughs & dances & plays the summer away.

Arundhati Roy stages a demonstration in front of the ant’s house. Medha Patkar goes on a fast along with other grasshoppers demanding that grasshoppers be relocated to warmer climates during winter. Amnesty International and Koffi Annan criticize the Indian Government for not upholding the fundamental rights of the grasshopper.

The Internet is flooded with online petitions seeking support to the grasshopper (many promising Heaven and Everlasting Peace for prompt support as against the wrath of God for non-compliance).

Opposition MP’s stage a walkout. Left parties call for “Bharat Bandh” in West Bengal and Kerala demanding a Judicial Enquiry. CPM in Kerala and West Bengal immediately passes a law preventing Ants from working hard in the heat to bring about equality of poverty among ants and grasshoppers. Lalu Prasad allocates one free coach to Grasshoppers on all Indian Railway Trains, aptly named as the ‘Grasshopper Rath’.

Finally, the Judicial Committee drafts the Prevention of Terrorism against Grasshoppers Act [POTAGA]”, with effect from the beginning of the winter. Arjun Singh makes Special Reservation for Grass Hopper in educational Institutions & in Govt Services.

The ant is fined for failing to comply with POTAGA and, having nothing left to pay his retroactive taxes, his home is confiscated by the Government and handed over to the grasshopper in a ceremony covered by NDTV.

Arundhati Roy calls it “a triumph of justice”. Lalu calls it ‘Socialistic Justice’. CPM calls it the ‘revolutionary resurgence of the downtrodden. Koffi Annan invites the grasshopper to address the UN General Assembly.

The ant has since migrated to the and set up a multi billion dollar company in Silicon Valley. 100s of grasshoppers still die of starvation despite reservation somewhere in India… 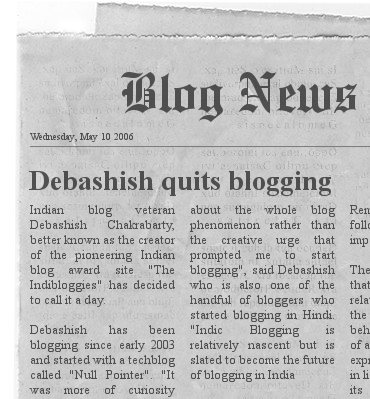 Ok, I agree, this was in poor taste. It would have been suited for a April fool post but I guess anytime is good time for some fun. (Via)