Is what I think when I see the keyword referrers to my blog. Savor few I encountered offlate:

KBC has been the impetus for all the Game shows on the Indian tele, but none could fare better. Channels were in a tizzy during KBC?s first spell, desperate for their share of the pie they went ahead with hastily assembled murky imitations like one hosted by Anupam Kher on Zee or the one by Govinda on Sony. KBC was able to generate interest even in its second avatar, the format was changed very little and this time it was felt other channels were unperturbed. Content with its singing-competition turned into a reality-singing-tussle Saregamapa Zee went ahead with its low-key “Howzee” while Star?s and Sahara?s One channel host similar flicks.

I don?t know how the Channels and their producers are getting this idea of revisiting the battle, things seem to be warming up suddenly in this front. Sony has roped in the South superstar Madhavan for a new show dubbed as “Deal or no deal” while Sahara One has perhaps a more fitting reply to the crorepati show KBC with Sanjay Dutt slated to host their “Mission Ek Crore” (seems “ummeed se aadha” can be an interesting catchphrase, rightaway).

Speaking of such shows, I only hope these shows do not follow the path of shows like “Khul ja simsim”, testing the participants for “Idiocity quotient”. 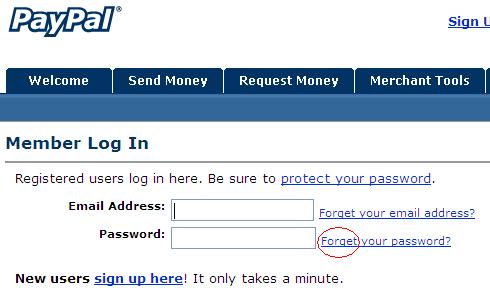 Very few organisations would go out of the way to provide additional facilities to their customers. Obviously Paypal is one such organisation. It gives you the facility to, guess what, forget your password. So if you were too proud of having an elephant's memory, accept the challenge 😉