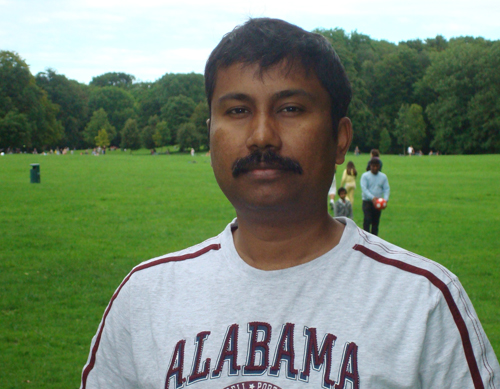 Thansk for visiting my bio page. I am Debashish Chakrabarty, a Software PM based at Pune, and an occasional blogger and podcaster. I have been on the Internet since the “geocities” days but opened my Blogger account in October 2002. I have an English blog Null Pointer (that changed many homes, from Rediff blogs to JRoller to my own hosted wordpress) and a Hindi one NuktaChini, though most of my blogging has now been replaced by micro-blogging at my Twitter account. I have been a DMOZ editor (that used to be quite prestigious at the time), created the first Hindi blog-aggregator Chittha Vishwa that also tracked advances in Indic Blogging, launched the first desi blog-awards called The Indibloggies and keep a sharp eye on Indic-blogging. I used to evangelize the usage of Hindi and Indian languages on the Internet and was instrumental in creation of Sarvagya, a wiki aimed at providing primers and advanced tips for people interested in using Hindi (and other Unicode supported Indic languages) on the internet.

I also used to moderate “Chitthakar”, a popular mailing list of Hindi bloggers and have been involved in initiatives like Buno Kahani (a group blog where various authors, literally, weaved a story) and Anugunj (a web event hosted in turn by Hindi bloggers – where various bloggers wrote on a given topic). He occasionally used to contribute to the Hindi Wikipedia (till it was taken over by fanatics).

I published Nirantar, hyped to be the world’s first Hindi blogzine and another Hindi webzine Samayiki, both seldom updated now. I was also the initiator & editor of the Hindi Lingua Project of Global Voices Online, a non-profit global citizens’ media project founded at Harvard Law School’s Berkman Center for Internet and Society.

During those good days I had been contributing towards localization of tools & software. Some of the projects I contributed to, include WordPress, Gregarious, Pebble, IndicJoomla, IJoomla, Scuttle, Snap Shots, Blog Bar and Splitweet.

All those activities have now taken a back seat, the daily grind of bread & butter has taken its tool. Although I still long to revive my Hindi Podcast show, may be some day I will. I was able to revive my Hindi podcast finally in 2021 although in a new avatar, with a career based podcast “Sopaan“.