For last several days, probably more than a week I was unable to access my geocities sites, I thought that it might be momentary, 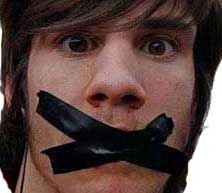 even thought that my office people might have filtered them off. The inaccessibility of blogger.com blogs was thought by many as a maintenance issue. But now it’s pretty much understood that the Indian government, apparently irritated by its recent intelligence failures, has decided to put glue-tapes on the lips of its citizens. Some say it’s only momentary, as some tracing is going on; others are frustrated as I am.

I hope things come back to normalcy soon, we are proud to be an emerging IT power, of being a tolerant democracy and I don’t think our “intelligent” beurocrats would think of such stupid ways to tackle terrorism. If only something good comes out of it!